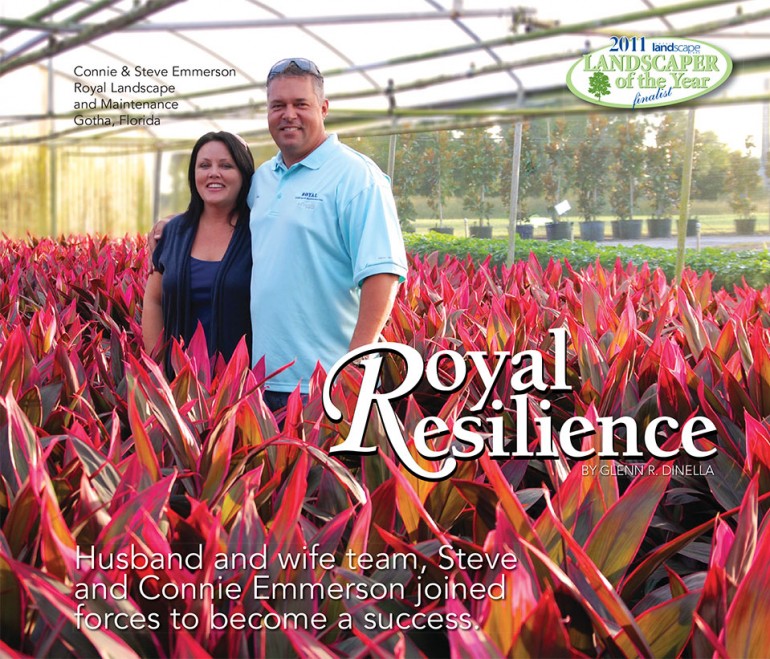 Husband and wife team, Steve and Connie Emmerson joined forces to become a success.
Originally oceans apart, Steve and Connie Emmerson met after Steve moved to Orlando, Florida, from London in the early 90s. Connie, who grew up in Illinois and later Texas, worked as the leasing manger at the apartment complex where Steve lived after he moved to the United States.
Steve’s entry to the landscaping business came via a gesture of help while the couple still lived in the Orlando apartments. Steve was lounging by the apartment pool one day when he saw a landscaper working nearby. “I saw a guy wrestling with this huge 65-gallon sago palm, and I said ‘Hey, do you need a hand with that?’ So he hired me for the day and asked if I could come to his office the next day at 7 a.m. I started at $5 per hour.”
This same landscaper later offered to sell the Emmersons his business, including 26 residential maintenance accounts for $9,000. “I didn’t have $9, much less $9,000,” Steve jokes. “But I scrounged together $5,000 and began paying the remaining $4,000 in monthly payments of $900.” Times were tight for the Emmersons, but Steve managed to make his payments, pay for fuel, insurance and all other expenses while bringing in only $1,375 per month. Steve did most of the labor himself, with only occasional help from temps, and soon had 70 accounts.
He was typically out on jobs or meeting clients...
Read Full Article

Landscaping With a Royal Flare

Published on Thursday, March 19, 2009
This article was tagged under: About Us 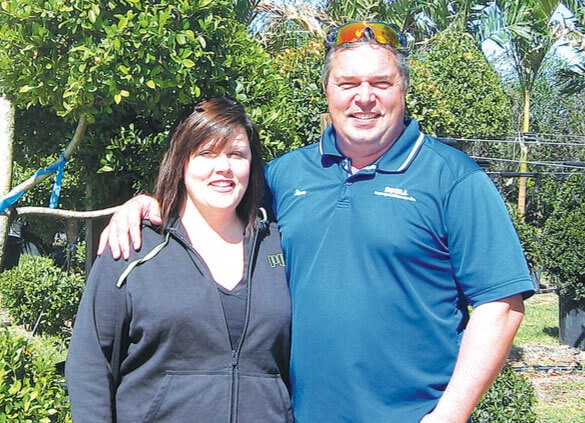 Floridians are fortunate to live in a tem- perate climate where plants and trees thrive year-round. Homeowners can enjoy beauti- ful outdoor surroundings that also translate into increased property values.

Early spring is the best time to consider a new landscape, as the threat of frost is a memory, and the blazing heat of the sun is still a few months away.

Some people may choose blooming plants to add splashes of color, or shrubbery and trees to provide shade and privacy. Others look to extend their outdoor living spaces by enhancing pool areas with pavers and water features. Whatever the scope of the project, Royal Landscape & Maintenance Inc. can coordinate services from design to installation.

Customers are invited to stroll the 19-acre nursery, located in Gotha, and make their selections.

“We tag each plant so they know exactly what is going in their yard,” said Steve Emmerson, who has co-owned and -operated Royal Landscape & Maintenance with his wife, Connie, for 15 years.

Complementing Steve’s more than 28 years of landscape experience is a full staff of professionals who can educate custom- ers about a variety of plants from proper placement to watering requirements.

Customers facing issues with existing landscape can turn to Royal Landscape professionals for advice. Homeowners can either bring in a clipping of a troubled plant or opt to have Royal Landscape personnel come to their homes.

Read Full Article
Back
123
Next
Posts Per Page: